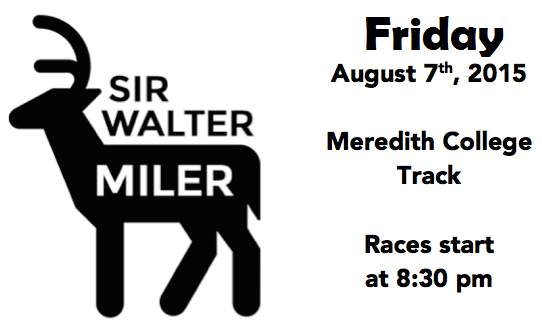 Looking for 2015 Sir Walter Miler results and videos of the races? GO HERE! and here for photos

The 2015 Sir Walter Miler will once again take place at the Meredith College track, with the pre and post party happening at Raleigh Brewing Company. Trophy Brewing, Unknown Brewing, Small Batch Beer Co., Big Boss Brewing, an unnamed Asheville brewery, and Raleigh Brewing have donated lower alcohol “Interval Sessions” beers to raise money for the The Umstead Coalition. Brant Kay of Better Off Dead (Grateful Dead Cover Band) will be playing tunes in the parking lot before and after the races, and the Cockadoodlemoo and 2014 favorite, Hanu, food trucks will be in the Raleigh Brewing parking lot as well. All events for the weekend are listed below. Races will also be broadcast live on FloTrack Pro.

*Click name for bio. Personal Records are in parentheses. Fields subject to change.